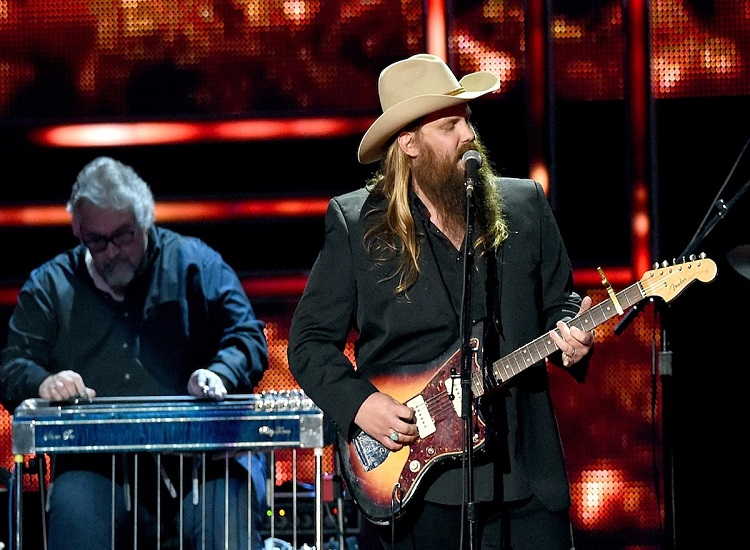 Country music singer Chris Stapleton was born in Lexington, Kentucky to a family of coal miners in 1978. He moved to Nashville in 2001 to pursue a music career, and first made a major breakthrough when he became the front man for the band The Steeldrivers in 2007. The bluegrass group found moderate success, with their two records both hitting the number two spot on the charts. Stapleton left in 2010 and founded Southern Rock group, The Jompson Brothers. That band independently released an album that same year, as well as toured a little bit in 2013, but it didnâ€™t seem to be anything to write home about.

While Stapleton has also written songs for the likes of Adele and Tim McGraw, he wanted to strike out into the industry on his own. In 2013 his father passed away, which Stapleton often cites as a major influence on his first solo album, Traveller. He took a road trip with his wife, Morgane (who is a vocalist on the record), down through the South West that really put everything into perspective for him.

Traveller came out in 2015 and was met with very positive reviews. For all of his hard work and dedication, 15 years after moving out to Nashville, Chris Stapleton was finally being met with success. The twangy, melodic nature of his voice and the numerous, low-volume ballads meant to tug at the heartstrings came as a very fresh country album in an age where many think that country music has become too much pop and not enough rock nâ€™ roll. Even his faster, more rocking tunes â€“ such as Might As Well Get Stoned â€“ have a hanging regret that lets the listener know exactly how Stapleton is feeling. With all the fervor encircling the New Country genre, Stapleton found a good rhythm on his album that captures the central feeling as to what country really is.

That same year, Stapleton won three awards at the Country Music Awards â€“ â€œAlbum of the Yearâ€ â€œMale Vocalist of the Yearâ€ and â€œNewcomer of the Yearâ€, which, needless to say, are very important awards. Winning those awards with his first album release really put Stapleton up toward the top of the ladder. And besides that, Stapleton was joined by Justin Timberlake for a couple of songs, which got a lot of good press. Everybody loved the performances, and Chris Stapletonâ€™s name wasnâ€™t just on the map now, it was even further at the top.

Stapleton was also the guest performer on Saturday Night Live, from the episode that Adam Driver (from The Force Awakens) guest-hosted. Now that he has cemented himself as a major player Stapleton has entered the touring scene and is currently floating around with his band in the Carolinas. You can see Chris Stapleton at the Country 500 festival at Daytona International Speedway May 28th, as well as Bonnaroo Music Festival June 9th.

There is a lot of hype surrounding Chris Stapleton, with his promise of being hard at work on another album. But if he keeps the heart and soul of Traveller, as well as maintains a strong band as he seems to be intent on, there shouldnâ€™t be any reason why Stapleton couldnâ€™t offer a repeat performance.

If youâ€™re in the area and interested in checking out a Stapleton concert, check out TicketFounder.com and find a location near you!

Three Things You Should Do Before Purchasing Catering Supplies

Want to sell house at the best price